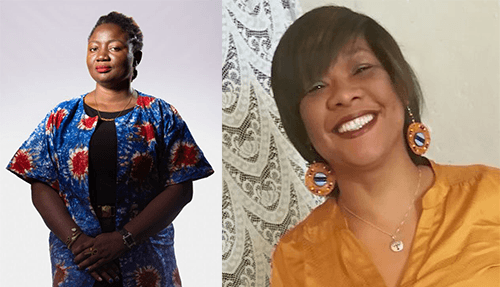 Global Minnesota is proud to host Facia Boyenoh Harris from Liberia and Roegchanda Pascoe from South Africa, recipients of the 2022 U.S. Secretary of State’s International Women of Courage Award.

Established in 2007, the annual U.S. Secretary of State’s International Women of Courage Award honors women around the globe who have exemplified exceptional courage and leadership in advocating for human rights, women’s equality, and social progress, often at great personal risk. This is the only U.S. Department of State award that pays tribute to emerging women leaders worldwide. Join Global Minnesota as we host these two brave women for a virtual social and roundtable on April 15!

Ms. Facia Boyenoh Harris is a life-long activist for women’s rights and against gender-based violence in Liberia.  As a co-founder of the Paramount Young Women Initiative, she has worked for decades to address the pervasive sexual assault and harassment of school-aged girls, create opportunities for education, and provide leadership training for the next generation of female leaders.  She is also a community organizer, from co-founding the Liberian Feminist Forum to facilitating coordination among female advocacy groups to fostering neighborhood activism, where she organizes groups on issues as wide-ranging as political participation, sanitation, and rape.  Currently, Ms. Harris is the Director for Outreach and Sensitization of Liberia’s Freedom of Information Act-enforcing Independent Information Commission. Photo courtesy of U.S. Department of State.

In South Africa, a country grappling with high rates of organized crime, gender-based violence, and murder, Roegchanda Pascoe has courageously advocated for peace, justice, and economic inclusion in the historically underserved and violent Cape Flats of Cape Town.  Despite multiple attempts on her life and continued threats from violent criminals, Ms. Pascoe continues to create safer communities, especially for women and children who have been traumatized by violence, and to train the next generation of community advocates.  She has called on the President of South Africa, local government, and police to increase crime prevention, intervention, and fight corruption; and she has bravely convened gang leaders and community members for conflict mediation. Photo courtesy of Giraffe Heroes Project.

This event will be moderated by Dr. Dipali Mukhopadhyay, an Associate Professor in the global policy area at our program sponsor the Humphrey School of Public Affairs.

Read more at The U.S. Department of State and Meridian International Center.