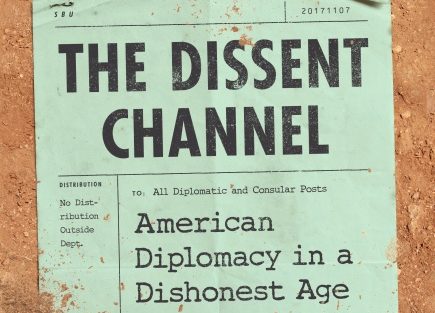 In her new book, “The Dissent Channel: American Diplomacy in a Dishonest Age,” author and former diplomat Elizabeth Shackelford recounts her assignment in South Sudan, and offers a firsthand example of devolving state of U.S. foreign policy and accountability around the world. Winner of the 2020 Douglas Dillon Award for a Book of Distinction on the Practice of American Diplomacy, “The Dissent Channel” exposes a foreign policy driven more by inertia than principles, to suit short-term political needs over long-term strategies.

Join us for a virtual conversation with Elizabeth Shackelford as she discusses, “The Dissent Channel” and her experience as a diplomat during the precarious rise and devastating fall of the world’s newest country, South Sudan.

Elizabeth Shackelford is a senior fellow in U.S. foreign policy with the Chicago Council on Global Affairs. She was a career diplomat with the U.S. Department of State until December 2017, when she resigned in protest of the Trump administration. Her resignation letter was the first to draw widespread attention to the declining state of diplomacy under Donald Trump. As a Foreign Service Officer, Elizabeth served in Somalia, Kenya, South Sudan, Poland, and Washington, D.C. For her work in South Sudan during the outbreak of civil war in 2013, she received the Barbara Watson Award for Consular Excellence, the State Department’s highest honor for consular work. Elizabeth is the author of The Dissent Channel: American Diplomacy in a Dishonest Age, winner of the 2020 Douglas Dillon Book Award. Her op-eds and commentary have been published in numerous outlets including Chicago Tribune, Los Angeles Times, and Slate. She has a BA from Duke University and a JD from the University of Pittsburgh.