When I saw a Facebook post about the World Expo 2020 in Dubai, I thought the opportunity was too good to be true. Seventy-five Youth Ambassadors between the ages of 18 and 29 would travel to the United Arab Emirates to represent the United States at the World Expo. Skeptical, I decided to do some research.

Before I applied, I didn’t know what a World Expo was. I remembered learning about World Fairs in elementary school, but like many people in the United States, I thought that this concept was obsolete. I was happy to discover that World Fairs have simply evolved into World Expos and that the event is very much alive. I also learned that the U.S. State Department’s Office of the Under Secretary for Public Diplomacy manages national engagement with Expos. During college, I had completed an internship in the Public Affairs section at the U.S. Embassy in Phnom Penh, Cambodia. I was eager and excited to continue my involvement with Public Diplomacy.

In my application video, I described why I wanted to represent Minnesota and how my life experience would make me a great candidate to communicate common values across linguistic and cultural barriers. One of my favorite objectives of the U.S. presence at Expo 2020 was to share the diverse communities of the United States with the world. This meant hiring individuals from parts of the U.S. that are underrepresented in popular media. 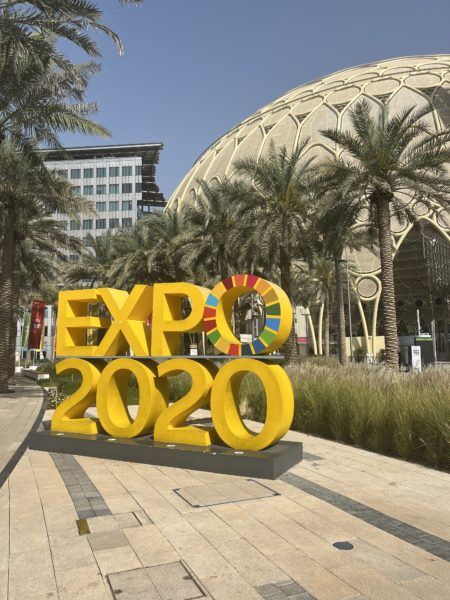 Much to my surprise, I received an invitation to interview and was later offered a position. Living and working in the United Arab Emirates was a massive departure from my typical comfort zone. I arrived in Dubai soon after finishing a year of Fulbright research on forced displacement in El Salvador. Although both were in the family of U.S. Public Diplomacy, the two roles were like night and day.

My work at the USA Pavilion, which was the official locale of the U.S. commission to Expo 2020, began in January 2022 at the height of the COVID Omicron variant. This meant that I spent my first days in Dubai in a mandatory post-travel quarantine, with an endless view of the desert from my hotel room. I was in no way prepared for the overwhelming experience that was to follow.

Not only was the Expo dazzling, but so was Dubai itself. Every corner of the city was bursting with innovation and discovery. Dubai is one of the most culturally diverse cities I have experienced, and I felt at home in the metro car as I made my way to the Expo grounds for the first time. An entire metro line had been extended to reach the Expo campus, which spanned over 438 hectares. In all, 192 countries were represented at Expo 2020, each with their own pavilion, as well as multilateral organizations and corporations. I passed elaborate buildings, green spaces, food carts, fountains, and hundreds of visitors as I made my way to the USA Pavilion. 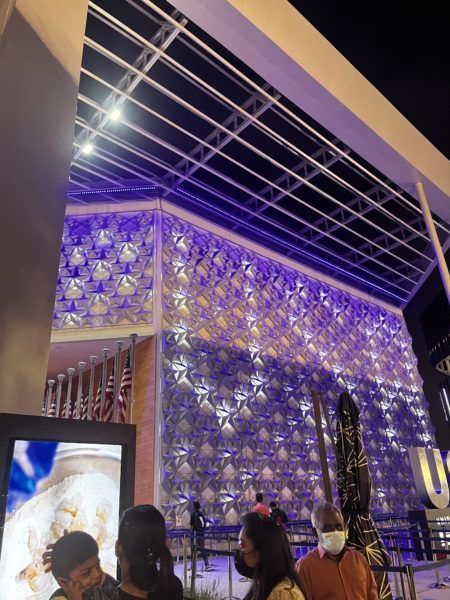 I was welcomed at orientation with a uniform and instructions on how to guide guests through the USA Pavilion. The theme of the USA Pavilion at Expo 2020 was “Life, Liberty, and the Pursuit of the Future.” This was explained in a welcome video at the start of the exhibition featuring Vice President Kamala Harris. I found during my time at the USA Pavilion that this was a key point of connection for many guests, because Dubai has a large Indian population. I listened to multiple families tell their children that the vice president of the United States had Indian heritage as they entered. This convinced me even more of the importance of representation in U.S. Public Diplomacy.

The USA Pavilion featured a moving walkway, a 1:1 scale replica of the Mars Opportunity Rover, and a lunar touchstone. A highlight of my time working at the USA Pavilion was telling guests that they could touch a real piece of the moon. Here and beyond the USA Pavilion, the Expo seemed to be a place where both children and adults could learn, play, and connect with new ideas. There were many interactive features across the Expo, such as a giant fountain that released waves to soak your feet and robots that answered your questions. However, I felt that the most important aspect of the World Expo in Dubai was the nexus it provided for people to gather and learn about one another.

Each country’s pavilion was distinct. Some were large and elaborate while others were simple and relied on engagement with local representatives. This engagement was essential, especially in the difficult geopolitical moment in which the Expo occurred. The event provided a place for solidarity and discussion in the face of the pandemic and international conflicts. Working amongst representatives from 192 countries between January and April 2022 challenged me to consider global events in a much more nuanced way. 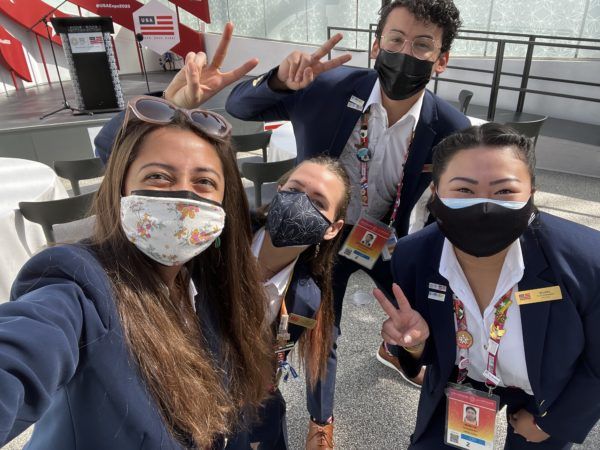 Many countries conducted hiring processes similar to the Youth Ambassador program at the USA Pavilion. This meant that Expo 2020 was teeming with young, talented, multilingual individuals eager to engage with one another. Recognizing this opportunity, I began a grassroots language exchange program to encourage interaction between pavilions. This forum connected members of the Expo community with the pretext of language learning and resulted in a plethora of meaningful connections.

Through the Expo language exchange program and other venues, I learned that the attitudes of young people regarding global issues, especially violent conflict, differ significantly from dominant media narratives. Expo 2020 showed me that young people from all corners of the world are exasperated by established paradigms of violence. Among this community was a general sense of frustration, as if we as future leaders were waiting for tired patterns to run their course while we incubated a more open and connected global community.

This fostering of opportunities for connection is the core of why World Expos are important. Beneath the spectacle of architectural wonders, inventions, and business opportunities, Expo 2020 represented a time for aspiring leaders like me to learn, play, and connect with one another while discovering that we shared common goals.

Addison Cross will be presenting as part of a Global Minnesota panel discussion “Community Conversations: World Expos” on May 25. Sign up here to learn about the history of World Expos and their cultural and economic benefits for host communities. Minnesota is in the final stages of submitting a bid to host a World Expo in Bloomington in 2027.