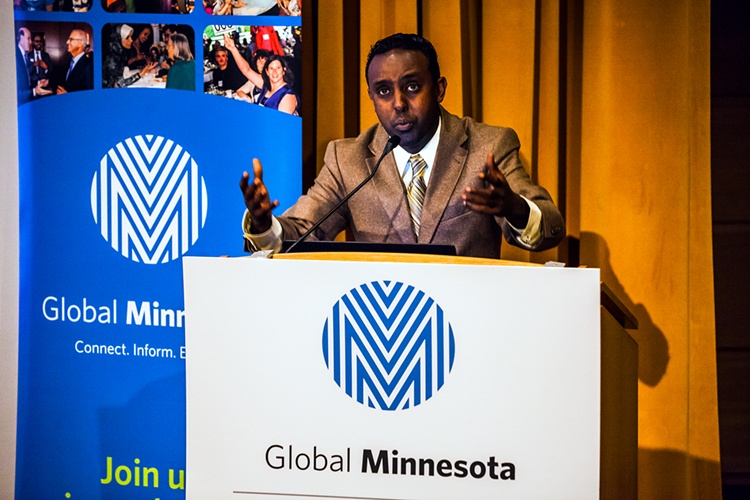 Mohamed Ahmed, community partner and Executive Director of Average Mohamed, has been named the recipient of the 2020 Citizen Diplomacy Award by the U.S. Department of State.

The award honors American citizens and organizations leading efforts to renew and strengthen U.S. relationships with the world that further U.S. foreign policy and public diplomacy. Mohamed is being recognized for his grassroots work on countering violent extremism by engaging audiences, particularly youth, in meaningful discussions about true Islamic values and democratic ideals, institutions, and civil society.

A proud American citizen, Mohamed immigrated to Minnesota from Somalia more than 20 years ago. Frustrated by the lack of messaging countering extremist propaganda and a high number of ISIS recruits coming from his community, he created and launched the cartoon, “Average Mohamed.” By speaking plainly and directly to Somali youth in Minnesota and abroad about the true teachings of the Qur’an, Mohamed encourages them to reject violent extremism and inspires them to think critically about diversity and community-building.

Mohamed has played a crucial role locally in his volunteer work as a Professional Exchanges resource for Global Minnesota. Global Minnesota is a proud host of the U.S. Department of State’s International Visitor Leadership Program, hosting hundreds of professionals from around the world each year. Mohamed has met with more than 30 of these visiting groups who want to share ideas and expertise on reaching young people to counter messages of extremism.

“Mohamed Ahmed is the epitome of a citizen diplomat,” said Global Minnesota President Mark Ritchie. “By tirelessly engaging youth and offering them alternatives to extremism, he has had a real-world impact on U.S. foreign policy priorities.”

Mohamed was presented with the award by senior U.S. State Department officials in a virtual ceremony on Wednesday, September 30. View a recording of the ceremony online at: https://youtu.be/rtGje7aZykU.

Culture Through Cuisine: Owamni by The Sioux Chef