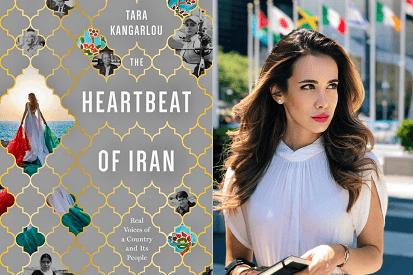 In her new book, “The Heartbeat of Iran: Real Voices of A Country and Its People,” award-winning journalist, author, and humanitarian Tara Kangarlou offers an intimate look at the lives of ordinary Iranians through a series of personal stories. They are stories filled with intimacy and irony that guide the reader through the nuances of life in Iran and offer a glimpse at Iranians who belong to an international community.

Join us for a virtual conversation with Tara Kangarlou as she discusses, “The Heartbeat of Iran” and the stories that fill its pages. The program will be moderated by Global Minnesota President Mark Ritchie.

“The Heartbeat of Iran” is available for purchase online.

This program will be live streamed on Global Minnesota’s YouTube channel.

Tara Kangarlou is an award-winning journalist who previously worked for NBC-LA, CNN, and Al Jazeera America. Her writing and reporting have also appeared in TIME, Vanity Fair, Al Monitor, and the Huffington Post. Tara has spent much time in the Middle East covering the ongoing Syrian conflict – in particular the Syrian refugee crisis and the MENA region at large. As a result of her work in the field, in 2016 Tara founded Art of Hope – the first U.S. nonprofit that’s strictly focused on providing trauma-relief and mental health support through Art Therapy for Syrian refugees and vulnerable host communities in Lebanon. After nearly four years of reporting and writing, her debut book The Heartbeat of Iran was released on June 1, 2021.

Presented in partnership with TeamWomen.